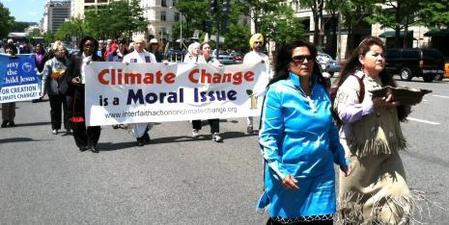 A Moral Challenge: Moving From F to A+ on Climate Change
By Peter Adriance, Representative for Sustainable Development, National Spiritual Assembly of the Bahá'ís of the U.S.

The Islamic call to prayer resonated from the balcony of the historic New York Avenue Presbyterian Church, once regularly attended by Abraham Lincoln in Washington, D.C. The cry of "Allah-u-Akbar" proclaimed the greatness of God. The piercing blast of the Jewish shofar -- a ram's horn blown with both reverence and conviction -- affirmed the sacredness of the gathering.

For me, as well as others, it was a stirring and fitting beginning to an extraordinarily diverse multifaith worship service with a common theme: the healing of the climate. By the time the service ended Bahá'í, Baptist, Buddhist, Catholic, Evangelical, Hindu, Jewish and Muslim traditions had contributed readings, reflections and prayers supporting that mission. Indigenous tribal leaders had further graced the ceremonies.
Read more here.

Interfaith leaders gather in Washington, DC to send a message to elected officials that responding to climate change is a moral imperative.

Interfaith Moral Action on Climate (IMAC) is a national coalition of faith and spiritual organizations that are calling for unified action to address climate change. IMAC's message is that climate change, with its disproportionate impacts on those who contribute the least to the problem, is an ethical issue and that the US government is under a moral imperative to respond. IMAC contends that an interfaith voice on the morality of climate action and the responsibility we have to be stewards of the earth, can mobilize change where scientific and economic arguments have failed.
Read more here.

It’s Earth Day, a time when we should be celebrating our commitment to caring for the health of our planet.

Yet, it is difficult to celebrate the Earth when we grasp the warning issued last month by the Organization for Economic and Community Development: If current emission trends continue, the world’s average temperatures will be at least 5.4 degrees Fahrenheit higher by mid-century, compared to pre-industrial times.

In plain English, if human-­generated emissions are not slashed rapidly, within the lifespan of many alive today the Earth will experience irreversible damage, leading to falling standards of living.

Even more disturbing, according to the organization, is that if we start now, keeping temperatures at safer levels would cost only about 0.2 percentage points of economic growth a year. That pales in comparison to the cost of inaction, which could be 14 percentage points or more annually.

Despite this and many similar admonitions, President Obama and Congress have failed to address the climate emergency meaningfully. This dereliction of duty has inspired a large group of religious and spiritual organizations to organize five days of faith-based activities in Washington, D.C., during the week of Earth Day calling for action on the climate emergency.

Interfaith Moral Action on Climate is playing a key role in organizing and linking these activities. Christian, Jewish, Muslin, Baha’i, Hindu, Buddhist and Native American organizations are raising their voices in unison and demanding that our elected officials rapidly address the climate crisis. I will be with them in Washington.
Read entire article here.

The reverend Paul Mayer is co-founder of the Climate Crisis Coalition and an activist for many noble causes  over the past fifty years. Along with religious and interfaith groups, he is organizing an earth week rally in DC to say “enough is enough” to a Congress that just doesn’t get it.
Listen to entire interview here.